Jyoti Prasad Agarwala was born on 17 June 1903 in an Agrawal family, to Paramananda Agarwala and Kiranmoyee Agarwala in Tamulbari Tea Estate. His uncles were renowned Assamese poets Chandra Kumar Agarwala and Ananda Chandra Agarwala. His forefather, Nabrangram Agarwala, had come to Assam in 1811 from the Marwar region in Rajasthan. After completing his studies in various schools in Assam and Calcutta (Kolkata), he matriculated in 1921. He went to Edinburgh in 1926 to study economics, but returned in 1930 before completing his course. On his way back, he spent seven months at the UFA studio inGermany learning film-making. 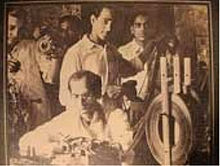 Agarwala putting the finishing touches to the editing of Joymati

After his return to Assam, he continued his activities for Indian independence that had disrupted his studies earlier and in 1932 he was imprisoned for fifteen months. He established the Chitraban Studio at the Bholaguri Tea Estate and began filming the movie Joymoti around the end of 1933. This was the first film from Assam. The film, released in 1935, was based on a play by Laxminath Bezbarua about the heroic Ahom princess Sati Joymoti imprisoned and tortured by a repressive Ahom swargadeo. In 1936 he married Devajani Chaliha. In 1941 he participated in the freedom movement, and in 1942, he went underground to escape British repression. Toward the end of his life he moved from a romantic to a more radical vision, which was reflected in his works.[2]

Linkedin Local Guwahati to host its next event at Tezpur

Guwahati: LinkedIn Local Guwahati is all set to organize season 4 on the 10th of …