For the first time in Tezpur, “The Kartik Hazarika National Theatre Festival 2019”, a seven-day festival from 03 January to 09 January 2019 was organized by the socio-cultural organization Jangamin Association with department of Cultural Affairs, Government of Assam. The festival was a social and cultural event celebrated with drama and cultural performances. The festival had provided a platform in which national and international play artist had exchanged experience. The festival is one of the projects to represent art and culture. The Festival includes 14 Dramas performed by National and International Artists. The festival includes street plays, book fairs, trade fairs, workshops and much more. The festival has brought some of the famous plays. The entire artist made a creative workshop.

The very first day of the festival started at 9 am with the homage to Assam’s Icons giving respect to Veer Lachit Barphukan. The programme followed by the hoisting of Jaatiya Pataka hoisted by Sri Pramod Boro, president, All Bodo Student’s Union at Nehru Maidam. Sri Pramod Boro stated that for progress there should always be sharing, caring, love and respect. People should share cultural relation and should not judge other culture. There should always be respect towards other culture. According to him Assam’s culture should be represented in different culture. After the valuable words of Pramod Boro, Sri Alok Nath, President, Jangam, Tezpur hoisted the Jangam Pataka. The programme was carried on by paying homage to Martyers inaugurated by Sri Makhanbala Devi, Mother of Martyer, Sri Premananda Mahanta, victim of Assam Movement. The programme was further carried on by commemoration to Late Kartik Hazarika by Sri Nilakshi Hazarika, wife of Late Kartik Hazarika. After that veteran theatre person were felicitated by Jangam followed by the projection of “The Days of Assam Movement” through Abdul Munnaf’s Camera inaugurated by Sri Nalini Baruah. The programme also included Book-fair Inauguration at Tezpur Govt. Higher Secondary School to Chitralekha Udyan road inaugurated by Sri Rajen Borthakur, Chairman, Assam State Textbook Production and Publication Corporation Limited. The inaugural ceremony started at 2 pm which included welcoming of dignitaries, welcoming speech by Sri Manoj Kumar Deka, DC, Sonitpur.

The closing ceremony of the seven day long Kartik Hazarika National Theatre Festival 2019 started with enactment of Bhaona inaugurated by Sri Preetom Saikia followed by the Jaatiya Sangeet. The Ankia Play “Rukmini Haran by Mahapurush Shrimanta Sankardev” was performed by the group “Barhamthuri Sanskritik Kendra”, Dikhowmukh in Brajawali Language. The ceremony concluded with the felicitation of the director of the Ankia Play “Sri Nilomoni Deva Goswami”.

The cultural spirit of the locals and the actors is expressed in the festival through their lively participation and performance. The participants of the festival seemed to be much excited and enjoyed the festival. While interacting with the participants we received lots of positive vibes from them regarding the festival. One of the participants Maidul Islam, who acted in the play “Theatre Village”, described his experience about the Kartik Hazarika National Festival along his experience in the city of Tezpur. He was deeply influenced by the love of the people of Tezpur. According to Mr. Islam, Kartik Hazarika National Theatre Festival is among one of the biggest festival of North East India. He also mentioned that renowned artist Jyoti Prasad Agarwala, Kalaguru Bishnu Prasad Rabha, Phani Sharma, renowned actor and director from Tezpur are his inspiration. During interaction Mr. Islam also mentioned about the iconic theatre Baan Stage, a platform for the development of socio-cultural field. He further added that he is thankful to Jangamfor providing him the opportunity to participate in such a big festival of North East India.

Another participant of the workshop Mr. Bhaskar Deka from Dhekiajuli Town, an actor by passion and a reporter of DY365 by profession expressed his positive views about the festival and the workshop. According to Mr. Deka this festival has proved that drama is still alive in people’s heart and people are still interested in watching a good drama. According to him drama creates a family. Mr. Deka added that government should take good steps and initiatives to help the socio-cultural festivals so that the young generations could carry along with them our cultural traditions. He further added that government help and initiative to the festival would be more beneficiary.

“Kartik Hazarika National Theatre Festival 2019” was not only a workshop or festival of drama but also a place of learning, experiencing dramatic arts at international level which had involved audiences and professional artists from all over the world. This festival has reflected life’s happiness, sorrows and challenges and will be one of our historical documents and more participants and actors are expected as the Ministry of Cultural Affairs, Government of Assam had taken a step to organize the socio-cultural event annually on Tezpur.

Some of the moments at Kartik Hazarika National Theatre Festival 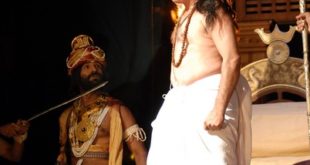 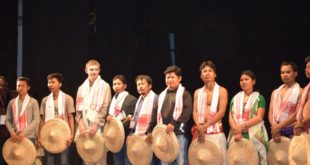